He wants to have sex with you. And has proven that over and over. He contacts you late at night asking to come over and it always leads to sex. As a matter of fact, every time you are together it always leads to sex. (With him taking the lead of course.) The chemistry between the two of you is there, so the sex is great. You want more yet nothing seems to be progressing in this “relationship” between the two of you. And you want to know why.

Well, it could very well be that the only relationship he is interested in having with you is a sexual relationship. Nothing more than that. Why? Because he doesn’t need to, and because he doesn’t want to. It’s that simple. He can have sex with you because he enjoys it. That doesn’t mean he wants you as a girlfriend. It doesn’t mean he wants to take you out and date you. He doesn’t need to talk to you in between meeting up for sex because he really doesn’t want to get to know you. This isn’t going anywhere, and he knows it, so why put in the effort? 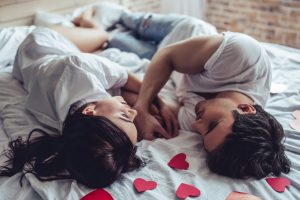 That doesn’t mean there is something wrong with you, or that you are not good enough for him. It just means he is one of those men who uses women for sex. This is about him, not about you. Sometimes it’s hard for women to understand that sex and emotion do not go hand in hand with everyone. Some people can completely separate the two and that is how they like it. They do not want the same thing you do. In that regard, you are not compatible. You are looking for two different things, but only one of you is getting what they want.

It is not that hard to tell if a guy doesn’t want more from you than sex.  They don’t really hide it very well. Some will even tell you up front that they are not looking for a girlfriend, but a friends with benefits situation will work for them. It’s on you if you ignore what they told you, because they made themselves clear. They may not want a relationship with you because they do not feel ready for one. Or they may not be able to devote the time and energy necessary to maintain a relationship.

You may think if you let them use you for sex in the interim, waiting until they are ready, that they will then choose you. Chances of that happening are almost non-existent. When someone is placed in the “sex with no strings” box, it is too hard to take you seriously as a candidate for a real relationship. Why? They don’t respect you. If they are going to choose someone to be in a relationship, they want someone they can respect.

Just because they have come to you repeatedly for sex doesn’t mean you are special to them. Sorry for the bluntness, but that is the truth. Think about it; if you put an ad on Craigslist saying you would be there to have sex with men with no strings attached, wouldn’t you get tons of takers? Of course you would. Its not about feelings, emotions, communication, intimacy, or friendship. It is about sex, that is it.

If it were about more than that, they would make room in their life for you to be more than just a sexual partner. Don’t let it affect your ego too much, or allow your ego to try and change their mind. It’s a waste of time, and you do not need to prove yourself worthy to anyone. If you really want to do something about it, cut them off. Set yourself free to find someone who values you, respects you, wants to get to know you, and is offering the chance at building a relationship with you down the line that is not just a sexual relationship.

1 comment for “He Wants to Have Sex With You, But not a Relationship”