Revenge dating is destructive in so many ways, and to so many people. It really is dating for all the wrong reasons, without any compassion to the people are hurting.  So what exactly is revenge dating? The term came to me when I was trying to describe three types of dating behavior.

The first dating behavior may seem obvious. When someone wants to get back at their ex they often think the best way would be to start dating someone. It is their “I’ll show YOU.” It’s very much like rebound dating, but with a revenge intention. They want their ex to think they are moving on, and have found someone new.  Their intention is not really to give a new person a real chance at a relationship. It is to use them as a way to hurt their ex, and in many cases, to get their ex to come crawling back. 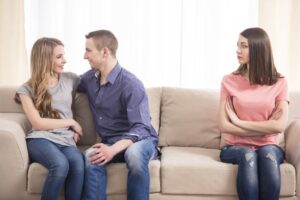 This is really hurtful to the victim of revenge dating. They usually hear how much the ex has hurt them, how they would never go back with them, so they think they are safe. After all, if they were hurt so bad, why on earth would they ever go back to them? Well, they find out the hard way that they never stood a chance. They were a part of revenge dating, without their consent or knowledge.

The second example of revenge dating would be when someone is hurting, and wants to use someone new to move on. The problem is they don’t really want to move on. They want to have someone as a back up in case their ex doesn’t come back, although they want them to. They don’t to appear to be sitting around waiting for their ex to come back. This is really karmically awful behavior.

When you use someone as a stand in for your ex, or a place holder if you will, that is cruel. This person winds up very hurt and feels duped when the ex comes back and they are left out in the cold. When you are truly not emotionally available to anyone but your ex, please don’t date. It is not fair, and someone may wind up being hurt thanks to you. You would not want it done to you, so don’t do it to anyone else.

The third example of revenge dating is when dysfunctional couples act out their toxic relationship and include other people. For instance, they have a fight. So one partner goes back to their ex. The other partner goes off and finds someone new. They both do this as revenge towards one another. They also both know that what they are doing is temporary, and that these idiots will get back together. The ex and the new person will be wondering what the hell just happened.

So be careful out there in the world of dating, because you could wind up the victim of revenge dating. A good way to avoid it would be to make sure the person you are going on a date with has been single for quite a while. Not only will that lower the chances of revenge dating, but it will also help weed out those that are still hung up on their ex. It gives them a chance to have healed from their past relationship and hopefully have let their baggage go.