If you are competing for his attention, you need to stop. Actually, stop competing for anyone’s attention. If you are in a relationship, you shouldn’t have to compete in the first place. Things like work or family issues can often draw your loved ones attention from you but that should be a short-term problem. We have to understand that sometimes you have to let their attention be elsewhere for a little while.

It cannot always be about you, and you cannot always be in first place. However, if you are in a relationship where you feel like you never get the attention you deserve, that is another issue altogether. I know you want his attention, and the fact that he isn’t paying attention to you makes you compete for it.

The simple fact that you are competing for his attention makes it a game you will never win. You may get it by competing, but only because of your efforts, not his. The point is that unless it is coming from him, and not forced or created by you, it doesn’t count. The problem isn’t fixed. 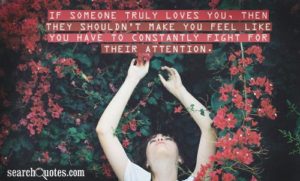 Are You Competing for His Attention?

Someone that loves you should give you attention freely. When they don’t, they are taking you for granted and not showing you the love you deserve. Love requires attention, or the person doesn’t feel they are receiving it. It is hard for someone to believe you really love them if you don’t give them the attention along with it.

Give your attention to your goals, wants, and needs instead of theirs. Do more for yourself, and less for them. If you go places with him and he spends all his time and attention on other people, then do the same thing. It is not his job to constantly be your entertainment and the only person he talks to.

If you are with a group of people, it is fine if he talks to others, and he shouldn’t have to stick to you like glue. However, if he knows you do not know anyone there very well, he should stick by you more closely and give you more attention. That is just being polite. If he won’t give you his attention during his spare time because he chooses to spend time with friends, family, or whatever, then do the same thing yourself. Make yourself busy.

It is exhausting trying to compete for his attention when you shouldn’t. Instead do the things you want to do that will make you happy instead of trying to force him to do it with you. Maybe when he starts to see you enjoying your life without him, instead of waiting around for him, he will turn his attention towards you.

If you are competing for his attention with another woman, you both are lowering your standards while he gets the ego boost of the century. He needs to make the choice at a certain point, he shouldn’t have you both. Don’t make it a competition between the two of you while he sits back and watches. Especially if it is at the expense of your dignity and self-respect. You should have a man in your life that wants to shower you with affection and attention. Not a man who is not sure which one of you he wants. In most cases he wants both of you, and enjoys playing you both against the other. In this case there will always be a loser, just don’t let it be you.

1 comment for “Are You Competing for His Attention? If So You Need to STOP!”