I know why. It is because your words are not followed by ACTIONS. Therefore, they are meaningless and no real threat to him. So he doesn’t take out the garbage like you asked him 3 zillion times. What happens? Your day may be ruined, his is not. What is the worst that happens? You tell him again or rant and rave about it? I would rather listen to someone bitch for 15-20 min rather than take out the garbage in the cold. Seems he feels the same way I do. Are you getting it now? Talking, without consequence, is no big punishment. Threats, without follow-up, are as scary as butterflies. 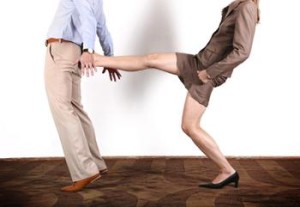 Are you Talking but He is Not Listening

So how do you get him to take you seriously? Not by talking, but with a boot in the ass. Forget words, it is butt-kicking time. How?

Here are some examples:

1. Lets say the man in your life has convenient memory lapses. He can remember all kinds of useless sports stats, but cannot seem to remember to do what you ask him to. My suggestion to YOU is to stop talking, and start FORGETTING. Forget to pick up his dry cleaning like he asked, or cook dinner like he expects, or pick up his hemorrhois cream, etc. When HE asks YOU why you didn’t do it, say the same lame excuse HE uses: “I forgot”. Betcha it wont take him 30001 times before he gets it.

2. He keeps hurting your feelings? Don’t tell him again and again how hurt you are, or why he shouldn’t do that, how much damage it causes, etc. Nope. He showed you time and time again how little HE cares about YOUR feelings, so it is time YOU show HIM how little YOU now care about HIS. You cannot explain to him what it feels like when your feelings are hurt by him, you have to SHOW HIM.

3. He keeps repeating behavior you warned him over and over not to do again? Enough with the warnings, follow through on your threat. Have the courage to finally give him the punishment you told him you would give him. Let him begin to realize you might ACTUALLY mean what you say. Until he does, you will NEVER be taken seriously.

4. He breaks dates or is too busy to see you even though you complain about it, and tell him over and over how disappointed or angry you are, and how much you want to spend time with him. This guy is either taking you for granted, or doesn’t really care too much about you or the relationship. It is time you found out, as opposed to wasting your time talking to him about it. Tell him one last time that you either need to spend more time together or he needs to stop cancelling plans on you. Then, when he does it again, tell him it is the last time, and that he can call you when he can make you more of a priority in his life and treat you with respect. Then shut up, and don’t call him, see him, text him, email him or anything until he DOES contact you because he is ready to step up to the plate. Waiting around for him to make you a priority shows him you know you are not a priority and have accepted it. And you wonder why he doesn’t make a change?

5. Cheating, and other women. If you have talked about his other relationship and how he needs to end it or that he needs to end his relationships with other women, it is time to stop talking. You said it enough, he heard you, and he either does not care, or does not take you seriously. If you are saying to him that you don’t want to share him, why are you showing him you will? Which should he believe? Actions speak louder than words ladies……
.
So, in closing, there is no reason to keep talking when he isn’t listening. There comes a time when simple words won’t suffice, and it is time to make yourself heard through your actions.