If someone is breaking relationship rules, they should expect you to break up with them. Sure, there are those couples that break up for stupid minor things, only to get back together again soon enough, but most couples have a short list of things that are unforgivable. Not every infraction will cause a break up, but there are some relationship rules that, if broken, will likely cause a break up.

Most couples have enough common sense to know what the top relationship rules are and avoid breaking them. They don’t want their relationship to be over, so they make sure those rules are never broken. But during the course of a relationship those rules can be broken. Not because a partner necessarily wants the relationship to end, but because they are testing boundaries in a very dangerous way. They want to see what they can get away with, and if you let them get away with too much, rest assured it is only going to get worse. 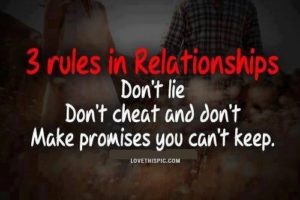 For instance, it is pretty much common sense to know that if you end a relationship over minor things, or lame excuses, you should expect it to be over forever. You should not think that you can do that to someone over and over again or even once and get away with it. The sad thing is way too many people break that relationship rule because their loved one keeps taking them back. They broke a relationship rule, a big one, and yet they got away with it. Do you think they will do it again? Of course they will.

And thanks to that, the relationship is almost always going to get worse and worse and frankly, an embarrassment. In relationships, rules are not meant to be broken, unless you want it over forever. If you cheat, lie, steal, or mistreat the person you are in a relationship with, you should have just broken up with them instead of doing those things to them. If you expect to get away with that and want those types of behaviors to be included in your relationships, then clearly you are not looking for a stable relationship.

Crying, screaming, and talking are not going to cut it. If it is a major rule, there should be major consequences to them. You are the one that got hurt and angry. Don’t you think since they broke the rules they should get a harsh punishment? And if you put these rules in place, why aren’t you seeing that when they break the rules they break you and the relationship down. Why are you letting them get away with it? Relationship rules are not meant to be broken, they are meant to be taken seriously, by the both of you.