CLOSURE seems to be the thing you think you need to move on from a relationship that has ended. But exactly is it that you need to get closure?

Someone I spoke with a few months back told me her and her boyfriend had a big fight because he had been cheating on her for some time. When she found out he was seeing someone else she dumped him. Sounds like closure to me. He is not the right guy for her.  He refused to be faithful, broke promises, lied, and would not change. Case closed. Move on. Find another guy. Made sense to me, but apparently not to her. 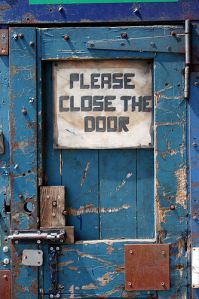 CLOSURE: What do you Need to Get Closure?

She kept whining to me that she needed CLOSURE. My head began to spin, and I asked her “Why don’t you have closure already? What do you need from him that will finally shut that door? What do you mean you don’t have closure?”

She wanted him to be sorry. She wanted him to realize she was the best thing that ever happened to his sorry loser self and that he would never find another woman like her. She wished he would ask her forgiveness, so she could say NO, or so she says. She wanted his friends and family to tell him what a fool he was for letting her go. She wanted to cheat on him so he would know what it feels like. If she could get some of those things, then, and only then could she get closure.

It was then that I had to give her a reality check. Yes, in some cases your ex will regret losing you. Sometimes he won’t. Sometimes he will get karmic revenge by meeting up with a woman who is as big of an asshole as he is. Sometimes that is not what karma has in mind.

Yes there is a guilty pleasure in knowing he got screwed over, but that would not give you closure. If you were empowered enough to see reality, that he wasn’t worth your time, that he did you a favor by releasing you from this unhealthy relationship you didn’t deserve and that you now have the freedom to find happiness with the right guy…you wouldn’t want to hear from him. You wouldn’t spend one millisecond thinking about that asshole, you would be concentrating on yourself.

Justice is not always in the form of his punishment for what he did to you. Justice really is the rewards you reap for no longer having this piece of garbage in your life. THAT is real closure.

We all have encountered someone who has not treated us well, and we all need to get over it. We should also take the time to take some ownership as well. If you let him cheat on you 6 times, you have to take the responsibility for allowing it to continue after the first time. Once, shame on him, twice, shame on you. You chose to take the risk. If I risk 100 dollars gambling in a casino I can’t get mad at the casino when I lose. I chose to play, I took the risk.

Don’t wait around for karma to punish the man who broke your heart so you can get closure and can finally move on. Move on anyway. One step at a time, baby steps if need be. Crawl if you have to. It doesn’t matter if now and then you take a step back as long as you keep moving forward. Don’t let a lack of closure keep you standing still. Closure is not that far away, it is closer than you think so just keep moving.

2 comments for “CLOSURE: Exactly What IS it You NEED to get Closure?”