He made contact after ghosting you, so now what do you do? When he suddenly dropped off the face of the earth you went through every emotion imaginable. You worried that maybe you said something wrong and rack you brain wondering what it was. You go over every conversation you had again and again wondering what you could have said that made him not speak to you again.

You get angry that they have not answered when you called and won’t answer your texts. It hurt your feelings when they blocked you on social media. You lost sleep wondering what the hell happened. You could barely think of anything else because him ghosting you made no sense and was not fair at all. You wish he would tell you why instead of being so silent. You feel you deserve an explanation for treating you like dirt. You didn’t know when or if you could move on because you didn’t know if it was really over. And now he made contact after ghosting you for so long, and you wonder “Now what?”.

Does he want to come back? Does he regret what he did? Would he ever do this again? All these questions come up all at once and you immediately want to hear what they have to say. That makes sense, after being ghosted to want to get some answers, but keep a few things in mind. There really is no good reason for someone ghosting you. Sorry, but there isn’t. 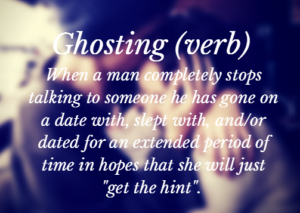 Nothing they can say can explain away what they did. If there was a family problem, health problem, or any other problem they could have told you about it. They could have sent an email, a text, given you a call or written a letter. They did not have to resort to ghosting you. Some people do not like confrontation and when they end a relationship they simply disappear. That is their choice, and it is a shitty one. Ghosting leaves a person in a state of limbo and it is crueller than simply saying “It’s over”. Someone that can do that to you once, can do it again just as easily. This is how on/off relationships can be created. You can get all the promises in the world from them but that doesn’t mean their word means anything.

It makes total sense to want to know why they did it. But if they act like it is no big deal or don’t even bring up why they ghosted you run for the hills. This person clearly has no remorse or regret and you don’t need to listen to what they are up to or what problems they are having now. You don’t need to see them either. We have a reasonable right to be treated with dignity, and they have a lot of nerve dismissing what they have done. You need to be very careful to not get sucked back into their lives so easily. They broke all the trust you had in them, and they need to earn it back slowly. Not just with words, but with action. If you want to use the opportunity to tell them how bad what they did to you felt, feel free to do so. You have the right to express that to them, and they should have known they would hear it from you.

So if he makes contact after ghosting you, don’t just feel elated that you finally heard from him. Remember everything they put you through, and that there a real chance they will do it to you again.