Justifying bad behavior in relationships does more harm than good. When you justify bad behavior in your relationship you are setting very dangerous patterns that will be hard to break down the line. If it goes on for too long, it will become impossible to change it.

Justifying bad behavior is really just an excuse to not address significant issues in your relationship because of fear. Yes, you may love this person, and of course you should have a certain level of fear of losing them. That is healthy in every relationship and what helps people keep their bad behavior in check. What is unhealthy is justifying mistreatment and toxicity when someone is afraid to speak up for themselves and stop the bad behavior.

A healthy, happy relationship needs to have boundaries, and you cannot be afraid to enforce them otherwise they don’t really exist in your relationship. That is like having a jail with no guards, and no locked doors. People use excuses such as “I am trying to be the bigger person”, when in reality, you are lowering your standards. 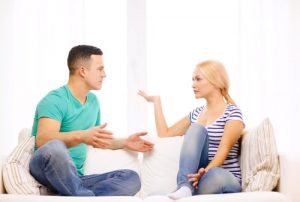 If you are in an adult relationship, you should behave like a adult, and understand you are responsible for your bad behavior. So should your partner. So enough of that excuse. They know what they did was wrong, even if they are trying to defend it, and you need to stop allowing them a free pass.

Why should you be afraid to lose your partner for calling them out for their bad behavior if you partner is not afraid to lose you by behaving badly? Can you not see that they know your fear, and that because of that, they believe they can get away with acting a fool because you give them no consequences to their actions? The saying “What you allow will continue” is so true in relationships. You can justify your fears as much as you want, but the truth is the truth. Doesn’t your own situation prove that? How long are you going to stay in a state of denial?

If your fear is making you behave badly, disrespecting yourself by allowing yourself to be mistreated, you need to create more balance. You need to both be afraid that bad behavior can end the relationship, not just one of you. The only way to do that is to address the bad behavior in the relationship instead of justifying it. And keep in mind, bad behavior is solved more so by actions, rather than words. Actions enforce boundaries more so than empty words that have no actions backing them up.