A long distance relationship comes with its own unique set of issues and concerns. He says he is looking for a relationship. He wants to meet someone to settle down with and share his life with. Then why the hell is he dating women that don’t even live in the same state? Did he date every available woman in his state already? Or even his country?

With internet dating now a more socially accepted norm, long-distance relationships are on the rise. It is hard enough for an already established couple to go from a relationship where they can see one another often and easily to a long-distance relationship and survive. When you are beginning a relationship from afar it is even more difficult. So why do it in the first place? Has this notion of added difficulty and issues not dawned on the men pursuing these types of relationships? Has it dawned on you? It’s one thing if you are planning on moving to that area in the near future, but if you aren’t, why even start something that has additional risks, and less of a safety net?

For con artists, man whores, game players, and commitment-phobes, the long distance relationship is a godsend. You can be anyone you want to be on the internet, and you can hide almost every detail of your life. A man can tell you he lives in a 4 bedroom house in a quiet town, works as an architect, and goes to church every Sunday. How do you know that any of it is true? Even if he sent you photos of the house he could have taken pictures of a friend’s house, or that house might have been his before foreclosure and he is now back living with his mom and dad. 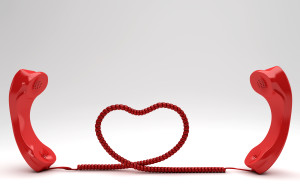 The consequences for HIM if he is lying is basically to never hear from you again. Big deal. No offense, but big deal. He knew at some point you would find out anyway so he kept himself emotionally distant to a certain degree. What are the consequences for you? Feeling betrayed? Foolish? You may even be out some money for plane tickets or gas to visit this person. Shouldn’t you take everything they say with a grain of salt? A pillar of salt?

When signing up for a long distance relationship shouldn’t you already be asking yourself what is going to happen as this “relationship” progresses? Which one of you is going to be the one who has to MOVE?? You? You are going to uproot your entire life for a relationship? What about your home, friends, family, kids, job, etc?

If you are going to uproot all of that, and risk all of that, you need to run a background check on this guy and ask him for a copy of his credit report. Don’t feel bad or sneaky about doing it either. This is your life we are talking about and you have too much to lose. You need to visit him at his place of residence (not a hotel) and see how he lives. You need to ask him to show you where he works and meet some of his co-workers to make sure he has the job he says he does. You need to meet with his friends and family so you know that THEY KNOW you exist. When talking to his friends and family you need to not talk about yourself, but talk about HIM. Let them know what you like about him, based on things he told you, and see their reactions. If you tell them you find it so exciting that he lived abroad and they give you a quizzical look as if you are from Mars you know he lied.

Protect yourself beforehand, because once you have put everything important to you at risk for this man, it is too late and the consequences can be disastrous.

A player has it made with a long distance relationship. He can be writing the same drivel to you and 10 other women. He can tell you he will be traveling out-of-state for work when in actuality he is spending time with another woman. He can be living with another woman for all you know! He could be married to another woman for all you know!! Did you run a background check? Why NOT? Has he given you his address? If he has had you send things to his house? You should, and make sure you enclosed a cutsey-wootsey card so if a woman lives there with him she will rip his face off FOR you.

Does he speak to you often at night? If he only contacts you during the day that leaves his evenings free to be with another woman, doesn’t it? Men cheat on women that they live with, that they are married/engaged to, how hard do you think it is for them to cheat with a woman from another state? You can’t drive by his house, you aren’t spending time AT his house, you have no way of knowing really WHAT he is doing. You have to be more careful, more cynical, and less trusting in situations like this.

A background check is to make sure he isn’t married, lives where he says he does, any criminal records he might have, etc. That is information you should be privy to. You are not reading his diary. This is public information that if you LIVED in his town you could find out at the county clerks office. So get over your feeling of guilt for not trusting him enough to run a background check on him. Trust is to be earned, and it can be earned with a background check verifying everything he is saying is true. Trust should NOT be earned because he writes you deep meaningful EMAILS or has lengthy phone calls with you.

Now what if this person wants to move to where you are? Let me guess, he wont get his OWN place and then begin the NORMAL process of dating you and then seeing where it goes. Nope, more often than not he is going to move into YOUR house. With YOUR stuff. Perhaps with YOUR kids. And you still don’t think you should get a background check on him? WHY???

Sure you know his sweet side, and I am sure he has been very nice to you, but how is he to live with? You don’t know til he lives with you, do you? What is like when he is mad at someone or during a fight? You don’t know that til it happens, do you? Don’t you think you should find out if he has been arrested for domestic violence or is god forbid a pedophile that you are inviting into YOUR home to meet your children?

Pedophiles, rapists, and men who commit domestic violence don’t have a scarlet letter on their chest. They don’t look like the boogeyman. They look like everyone else, come from different economic backgrounds, and have different intellectual levels. Don’t think that you know what one looks like, acts like, sounds like. You don’t. And let’s say he checks out ok, have you thought of what will happen if it doesn’t work out? Will you be prepared to throw his ass out immediately or will you let him stay because you feel guilty or sorry for him. After all he did all of this for YOU, so how can you just throw him out?

You can, and you should if things get bad enough. You didn’t force him to do anything he didn’t want to, and you both should have known (if you are over 12) that there was a chance (a bigger one that you wanted to believe at the time) that this wouldn’t work out. So if it doesn’t work out, end it as soon as possible and get this person out of your home.

He wants to watch the game with his buddies instead of spending Sunday with you? Oh, that’s right, he can’t spend Sunday with you ANYWAY so you can’t get mad at him. Pretty cool for him, huh? Long distance relationships should, in some cases be called long-distance booty calls. I know what you are going to say, that he writes you wonderful emails, talks to you on the phone all the time, blah blah blah. He is making plans for your future, blah blah blah. Well let me let you in on a little secret: he has no intention of having a future with you. The guys that play this game come up with excuse after excuse not to marry you, and for neither of you to move at this time. When you finally get fed up and pitch a fit, the relationship will be over and he can go find another victim.