Moving In Doesn’t Mean You’re Moving Forward
For the longest time many women believed that once they married a man they truly “had” him. Along with the ring, ceremony and flowers they surely felt would have commitment, better treatment, grow closer, and the security that they would not break up. What wishful thinking that was. Nowadays, many women think that having a man move in, or moving in with a man, means the same things. It doesn’t. Today people are living together before even dating a few months. There was a time when living together was a step couples would often take to “test” the relationship before marriage. It was usually done by committed couples who had been together, gotten to know each other, and believed their relationship was being taken to the next level before marriage. Now people are living together when they barely know one another. It’s as if there is this new form of dating where you not only date someone while getting to know them but you live with them as well.
Many women still believe living together means certain things or supports certain expectations while the truth of the matter is that times have changed. Live-in couples used to take their live-in situations seriously, it was a major step, but today it is not.  For the most part, people don’t view live-in couples any more seriously than couples who live apart, yet the women in the live-in relationships do. Now of course if you have been in a relationship with someone for a long time, know one another well, have a healthy, happy life together and live with one another, that is one thing. But knowing someone from the internet for 4 months and running off to move in with them is another. Same holds true with dating someone for a month and choosing to move in with them. 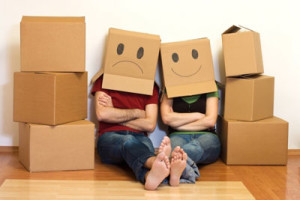 Moving In Does Not Mean Your Relationship is Moving Foward

Just because you changed your residence does not mean the seriousness of your relationship has changed. It’s really just about geography. If your relationship with your boyfriend or husband sucked in your New York apartment it will suck in an apartment in India. If your boyfriend cheated on you before you lived together, to think he won’t cheat because you changed his geographical location is ridiculous. Roommates live together. That doesn’t mean they love each other, will grow together and will be committed to one another. Anyone can live together, but to have a healthy relationship while living together is another story.

Changing residence does not always change a relationship for the better, quite often it does for the worse. Living together with someone too soon can actually make the relationship last way longer than it should because of financial reasons or an inability for one of them to find another place to live. Do you want to be in a relationship with someone who is only there because they can’t afford to be anywhere else? Do you want to have to stay with someone because you don’t have anywhere else to go or would feel guilty for throwing them out on the street?
Try being their girlfriend for a while before you become their landlord. If your boyfriend needs to move in with you because he presently lives with another woman (wife, girlfriend, lover) ask yourself why he can’t get a place of his own? The word “rebound” comes to my mind, but rarely to the women who allow this. They are too busy thinking “victory” over the other woman he is leaving. Living together should be a part of the progression of a relationship, not something to use to progress a relationship that is in a state of infancy or dysfunction.
Copyright 2009-2014 All rights reserved. Written permission is required from the author to post on your site or be used in any way, shape, or form. If you quote an article please credit and supply a link to our original posting. While many people seem to be under the impression that we should be flattered that you use our work, we are not, plagiarism is plagiarism, and we do not find stealing our work and our ideas flattering at all and you will be prosecuted under the law.