Moving in together, for the right reasons, can give valuable insight into whether or not a couple is truly compatible. If a couple moves in together for the wrong reasons, the results can be disastrous. What could have been a bad dating experience with no major fallout can become a major mistake because they moved in together.

One of the right reasons for moving in together would be because a couple has been together long enough, without major drama, and want to take their relationship to the next level. The wrong reason would be to think that a relationship with constant ups and downs would get better just by living together. Relationships are not fixed by sharing space together. Instead, sharing space can bring a whole new bunch of problems to the relationship.

When a couple lives together, there is so much more that is revealed. We learn each others habits, level of cleanliness and expectations. Now there is less privacy and new boundaries must be created and enforced. Your house (apartment, whatever) was your domain. You decided the temperature of the heat and air conditioning, when you did laundry, how quickly or late you paid the utility bills. Every decision was yours alone. When you move in together, both of you have a vote, or at least you both should. 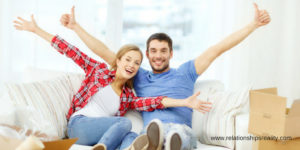 Moving In Together For the Right Reasons

If one of you is the only one of the lease, or owns the house/condo/whatever there can be an imbalance in the decision-making. It is up to you and your partner to really discuss your expectations of each other and lay it all out on the table beforehand. Too many couples barely date and because of a job loss or financial issue that arises early in the relationship they move in together too quickly. Although you may want to help out your partner in your new relationship, letting them move in for financial reasons in usually not a good enough reason. The relationship should be solid before making such an important step, and especially if there are children involved. It is up to the parents of the children to be extra cautious before involving them in your relationship, and sharing a home together.

Moving in together can be a great way for the couple to solidify the foundation of their relationship, by learning to work together as a team and share responsibilities. Learning how to make compromises and sacrifices can really move the relationship forward to the next level and deepen the connection. If one partner is paying all or most of the bills, doing most of the chores and upkeep, this can often unravel the relationship pretty quickly.

The truth is, many people move in together because one has plans of using the other. Sorry, but that is the truth. There are plenty of people willing to take advantage of others by allowing them to put a roof over their head and be their maid. If you are being treated like that, you are being used, or at the very least being taken advantage of. If you don’t put your foot down their will come a point (if you are not there already) that living together is about what YOU do for them, not about love or the relationship.

You are a doormat. Time to let them go out on their own and see if there is anything left to salvage of the relationship. You may be afraid that if you do that the relationship will end, but that is a chance you should take. If they do end the relationship, it wouldn’t be because you wouldn’t support them financially anymore, it was because they were using you and you wont let them anymore. You never really HAD a relationship. It’s a harsh reality, but one you need to face.

Moving in together lets us see one another at our worst. This is a good way to see all sides of our partner. It is NOT the time to make excuses or ignore any new red flags that arise. Now you have the opportunity to see what your partner has been hiding, and you need to have your eyes wide open. You may, sadly, see that the two of you are not truly compatible after all. No one really wants to find that out, but those that do, and are willing to move on from a relationship that isn’t right for them, can learn a valuable lesson and move on to the right relationship.