Relationships are not a race. The pace of relationships these days seems as though most people don’t want to take the time necessary to find the right relationship. They meet, and then almost immediately start wondering where it is going and how long it will take to get there. Slow down. Take the time to date and get to know someone. Find out everything you can about them before getting into a relationship so there are less surprises. 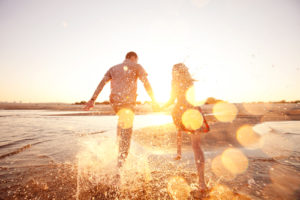 Relationships are Not a Race

At first people put a lot of time into getting to know someone new, but then they get back to their other responsibilities like their career, family, friends and outside interests. So many people wonder why someone came on so strong at first and then things cooled off. The reason is they only made the time at the beginning to win you over, they never had the intention of keeping it at that high a level.

If you see someone say once or twice a week for a period of a few months you have a better idea going forward that they have at least that much time to see you. If they can rarely see you while you are dating, you have a pretty good clue that being in a relationship with them will be pretty lonely because they won’t have time for you.

The label “relationship” may come with some perks, such as exclusivity, but it doesn’t come with all of the perks you may want. It makes sense to think that when you are dating someone a few days could go by without hearing from them, but when you are in a relationship, that shouldn’t really happen too often. Dating someone for a longer period of time before getting into a relationship helps you see what their relationship skills and expectations are. This way you know what you are getting into before you get into it.