Self Entitlement Issues in Relationships

1. If you or your loved one feel rules are made for others, but don’t apply to you, it is a self entitlement red flag. When you expect the one you love to be on time or there will be hell to pay, you should expect them to call you out when you are not on time. People with self entitlement issues will never accept your excuse, even if it is a good one, but expect you to accept their excuse, no matter how lame.

2. A person with self entitlement issues has the right to say no, but no one else does. Everyone else always has to say yes. They feel entitled to whatever they want or need from you, but they alone are allowed to decide to give you what you want or need from them. You may have lent them money time and time again, but when you ask for a loan they won’t make up their mind right away. They may also change their mind. If you ever say no, they will make you feel guilty, like a bad person, and look to punish you.

3. People with self entitlement issues feel as though asking you (which is really telling you) to do something for them is no big deal. They never think about inconveniencing you, or how you would have to go out of your way, because they are not asking too much. However, when you ask them for anything, no matter how small, they feel as though it is a burden on them. 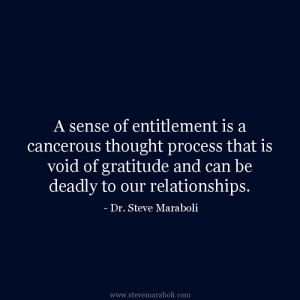 Signs of Self Entitlement Issues in Relationships

4. Another good example of self entitlement issues is their inability to count properly. Let me explain. You can do 4,000 things for them and they do only one for you, and they consider you even. They also would never count your 4000 things as 4000 things. They might be ok with saying you did 5. They will remember how many things they have done for YOU. That number will always be right, or higher. Yours will always be lower, and easily forgotten. They also expect the medal of honor every time they do anything like take out the trash. You could give them a kidney and maybe you will get a thank you.

5. When someone has self entitlement issues they put high demands on your attention. Their problems are the news story of the day, and you NEED to be there for them. Whether it is support, to listen, whatever. If you have a problem, you can almost never expect even 1/2 of what they expect from you when they have a problem. Why? Because you and not as important as them.

If you are involved with someone who has self entitlement issues, don’t feed into them. Don’t expect logic or talking to do any good. They will only get defensive,steer the conversation in another direction, go on the attack, or try to make you the bad guy. Realize it is not your job to fill this bottomless well, it is theirs. Sure, you can add your 50% to the relationship, but you can’t go much higher while they stay at 10%. Do not reward their negative behavior and expect positive things or changes to occur in your relationship. It won’t make them love you more, it will make them expect more.