Quite often when a breakup occurs because we are left for another woman we wonder “What does she have that I don’t have?”. 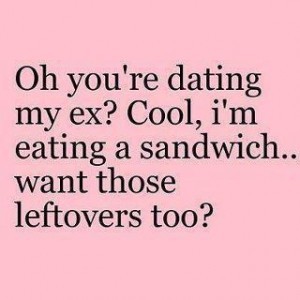 What Does She Have That You Don’t Have?

For starters: A lying, cheating pig of a man. Second, she has a man who will probably cheat on her too. And third, she has a relationship that will most likely end because he started it with her before he finished things with you. And last but not least, she has the ending of an affair, and the reality of what a relationship with him is really like. She also has bad taste. When you met him, he was free, and you had no idea he was this much of a scumbag, but she knows very well what he is capable of. She has a delusional mind. Where you would never trust him again, she is deluded enough to think he would never do that to her.

Not really something to envy, is it?

You could assume he left you for her because of something you lacked, but it really was not about you. He has no excuse for cheating, lying, and failing to work things out with you. It is also inexcusable that he did not end your relationship before starting one with her. You may mourn the loss of the man he once was, or what you thought he was. She does not have that man. The man she has is the man you never thought he was capable of being or you would have never been with him in the first place.

She now has a man you wouldn’t spit on if he was on fire. You have the memories and experiences of him at his best. She has a very uncertain future with a man whose good qualities and core values have been compromised. So forget about wondering what she has that you don’t. It is not about clothes, a nice figure, a great career. None of those things she has will save her from the broken heart and shattered dreams that she will most likely have in the future with him.

1 comment for “What Does She Have That You Don’t Have?”