I had a conversation with a woman the other day. She told me how the man she loved told her two weeks ago how much he loved her, couldn’t live without her, and loved spending time with her. The problem is, she just found out he GOT MARRIED this weekend. She told me how confused she was. Why did he say all those things to her only to get married to someone else? He spent so much time over the last few months pursuing her, and getting her to believe his feelings for her were real. Why did he do that? She then went on to ask me if I think his marriage will last, if he really loves his new wife, and what did I think was the reason he did this? She seemed so focused on all the wrong things. Yes, I understand she was hurt and devastated, but what does it take to give up on him? 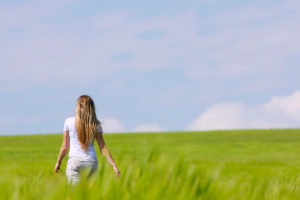 When Should You Give Up On Him?

When should you give up on him and quit hoping, dreaming ,trying, and crying? Shouldn’t we have rules or “deal breakers” in place, that when crossed, we know it is now time to give up? It used to be if a woman was cheated on, chances were HIS chances WITH HER were over. Now it seems men can cheat 100 times and they get another chance rather than her giving up on him.

Women used to wait a reasonable amount of time to get a commitment before giving up and realizing if she wanted one, she needed to find someone else because he would never give her one. Women used to wait a certain amount of time for a guy to ask her out, before turning her attention elsewhere. Now women are waiting months and years for the guy they like to ask them out. Women used to have sex once there were in relationships. Now they have sexual relationships with no strings, when they are wanting much more.

An emotionally unavailable man will never be emotionally available, so why be in a relationship with one? The relationship may be emotional on your side, but it is not on his, and never will be. Women used to demand more and have more patience and less tolerance for nonsense. Now, they demand less, get less, and have more patience but get nothing for it in the end. Life is short, way too short, to allow someone to waste your precious time. Anyone asking themselves if they should give up on him probably stayed with him way too long already. Give up what is not working for you, and if he isn’t working for you, he need to give someone else a chance to make you happy, because he obviously can’t and won’t.

1 comment for “When Should You Give Up On Him?”