I was speaking to someone the other day who was feeling so bad about a comment they had made to their significant other. They kept going on and on about how bad they felt, and how wrong it was. I told her to knock it off, because first of all, what she said was seriously no big deal. Second of all, after all the things he had done and said previous to her comment, he got off really lucky. It wasn’t her fault, it was his.

He started the day off by acting cold and aloof. She tried to break the silence and got nowhere. Instead she tried to make him breakfast, which he refused to eat. She asked him if he was upset with her, and he said no. He then continued to treat her badly to try to provoke her anger and hurt her feelings. She finally made one small sarcastic comment, and he went batshit crazy. Now she is talking about her role in this fiasco, and is trying to take some responsibility for it. 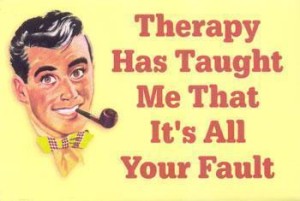 Whose Fault is it? Yours or His?

She shouldn’t. He started the whole thing by acting out. He allowed it to continue by not telling her if he had a problem with her. He then kept going and going until finally she said something snarky. When someone is looking to fight with you or cause drama, there is no way to escape it. Even if you leave, that will be their reason for blowing up. Did you do anything wrong? No. They wanted a reaction, and they made sure they got one.

The passive aggressive nonsense of treating someone like shit until they react and then attempting to turn it on them or make them partially to blame is bullshit. Women need to stop falling for this. I have seen this even with female friends at times. Let’s say a woman named Janice is friends with a woman named Sharon. Janice begins to withdraw from Sharon for no good reason. Sharon tries to reach out and Janice is either cold as ice, or doesn’t respond. Sharon asks Janice if something is wrong, and Janice says no. Sharon finally gives up, thinking Janice is treating her like shit for no good reason (and she is) when suddenly Janice is on the phone. What are Janice’s first words? “Why have you been acting so strange?” Are you kidding me here? This happens all the time, and it is a vicious, mean, nasty thing to do. People that pull this kind of garbage need to be booted out of your life for good.

What kind of mean-spirited, evil idiot do you have to be to pull this on people? It is time for women to understand that when someone provokes you and you react, it is on them, not you. If I walked up to you and spit in your face, I would expect a bad reaction from you, and I would deserve one. If he provokes you, he should expect a bad reaction from you, and he DESERVES ONE. If you don’t want the tiger to bite you, then don’t hit it with a stick. Just like we all must learn to take responsibility when we do something wrong, he also need to learn to leave responsibility where it belongs. It is not your fault that you react badly when someone treats you badly. Of course you should try to do your best to ignore them, but human beings can only take so much before they react.