Almost all of us have had a close friend or family member who suddenly disappeared or morphed into someone we barely recognize. You used to frequently talk on the phone and got together every so often but now a giant black hole swallowed her. It now takes her several days to return your phone calls. Plans between the both of you are non-existent, and when you do make plans, she often breaks them. What caused the life and personality to be completely sucked dry from this woman? What are you supposed to do? Ride it out or call her out? Realistically speaking if you do call her out she will deny that she has changed, or will do her best (and use most creative ways as well) to try to justify all these changes as “good things” that have actually made her life BETTER. 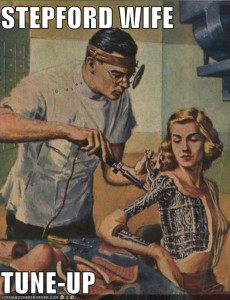 Disappearing Women: Women Who Get Lost in Relationships

There are a few reasons why this happens. First and foremost, it has be viewed as a cult. A cult separates you from friends and family, often portraying them as people who “just don’t understand” or a danger to the new-found happiness you have found within the cult. All the better to control you. Any man who wants you to distance yourself from friends and family considers them a threat. A threat to what? If he plans on treating you well why would he be so resentful of any time you spend with someone other than HIM? It’s because he knows damn well the things he is going to do to you, the things he is going to say to you, and the way he is going to treat you, will be a problem for anyone else in your life.  They are going to be the people responsible for the deprogramming and ruining all the work he put into his little Stepford wife.

Of course at the beginning of a relationship, you are going to want to spend every waking moment with this new-found person. However, in order to have a life with this person, you need to understand how unhealthy it is to allow them to be your whole life. What makes us well-rounded and constantly evolving people are our interactions with different people as well as having different experiences. To surround yourself with only one person makes you live in a bubble, which is bound to burst at a certain point. Think about the things he wants you to change. How much time do you spend talking to your mother or your sisters? What is it to him? Unless you talk to them 8 zillion times a day and he can’t have a simple conversation with you, or your mother/sisters have no boundaries and make nuances of themselves, why should he give shit? Why is it an issue? What does it have to do with your relationship with him? Why does he feel the need to come in and change relationship dynamics that have worked for you for years?

I know a woman whose son cannot see her for lunch (or any other time for that matter) because her daughter in law does not think a man should spend time by himself with his mother. Excuse me? Are you fucking joking? What kind of woman would behave this way and think like this? An insecure control freak, that’s who. If you are in a healthy relationship and feel loved, and trust your mans commitment to you like you proudly announce to everyone who will listen, then why are you hell-bent on keeping him away from friends and family without being present? People like this often use the excuse of “Well, they don’t like me, so if you love me then you shouldn’t be around them”.

Look at why those people don’t like the person you are with. Is it because this person has changed you into a zombie? Is it because this person has come in and dictated when, how, and where you can talk to them, spend time with them, etc? Someone who really loves you want to be a part of your life, not remove you from yours. Why do you allow this person who claims to love you, treat the people who have proven they do, shit? You know why you do? Because you have more faith in the other people than your partner. You believe the people who love you won’t leave your life, but you are secretly (or not so secretly) worried that if you don’t do exactly what your partner says you may lose them. It would serve you right when this relationship ends, or the day you realize how screwed up it is, that the people you let your partner abuse tell you to go to hell. Have you even considered the fact that this person can’t get along with anyone who was in your life? It makes sense that they wouldn’t get along with one or two of your “peeps” but all of them? What are the chances of that?

Disappearing Women: Women Who Get Lost in Relationships

Why doesn’t that raise the biggest red flag ever for most women? Because they need to pull a “Tammy Wynette” and stand by their poor misunderstood man? Or because they feel they have to “prove” to everyone that they didn’t fall for a loser? Why doesn’t the man in your life want acceptance from those who love you? Do they think you are incapable of choosing your friends and seeing your family for who they really are? Why is it alright for him to badmouth everyone else in your life and you suck it up but when anyone says shit about him you get defensive immediately? I am not saying all the people in your life are wonderful, and he should be able to express his real opinion about your friends and family, but you need to allow your friends and family to express their opinions about him as well. No, they shouldn’t constantly beat you up about it or make you feel stupid for being with him. But if you are constantly telling your friends bad things about him, how can they not say something?If you have to keep all of his behavior a secret from those that love you, you have an even bigger problem because you know what they will think. This is the reason why you wont tell them. Look at who you were before you met this jamoke. Were you confident in your decisions? Then why won’t he let you make any of your own anymore? Were you secure and confident? Then why are you afraid to disagree with him and take a stand? Did you go to the gym regularly? Why aren’t you going now? Why wouldn’t he want you to continue doing something that makes you healthy and keeps you confident about your appearance? Did you use to have an active social life with friends and family? Why has he made you chose between him and them? Why did you chose someone who would put you in that position in the first place?

You draw strength from those who love you. He weakened you when he cut your ties to them. That is how he wants you. Weak. Only the weak can be molded, the strong won’t bend. Did you used to have activities and hobbies that enjoyed? Why don’t you have time for them anymore? Why will you only do things that meet with his approval? Why are the only friends you hang out with (if you hang out with any) his friends? Why is he so much better at picking friends than you are? Do you realize that you have lost yourself? And his respect? How can he have respect for someone who allows him complete control over them? He doesn’t. Which means your relationship is a ticking time bomb. Consider the fact that you are also no longer the woman he fell in love with. Why would he continue to love you? You turned into the woman he dominated, so game over. You lost. he won. No more challenge for him. How long until he finds another game that excites him?
If you feel you have to consider his opinion or feelings before you consider your own in any and all decisions you make, then you have officially become a cult member. You are not two people who became a “team”, you are a peasant that serves the dictator. A team mentality is one that does the best thing for all its members, it does not serve one leader at the expense of the teammates. Why wouldn’t you want to be an equal partner in your relationship as opposed to a peon? Who have you become? His perfect woman? If you were his perfect woman then you wouldn’t have had to change a damn thing. You are supposed to compliment each other, not overpower one another. You are supposed to be his better half, not an appendage of him.

He is like the blob. He ran over you and just absorbed you and got bigger and stronger. It is time for you to detach yourself, find yourself again. If he doesn’t like the woman you are, won’t support you to be the best that you can be, and accept you the way you accepted him, then he isn’t the perfect man for you.

1 comment for “Disappearing Women: Women Who Get Lost in Relationships”